The nice takeaway from this game was Fausto Carmona's start. He was still wild at times, but if the Indians can get these types of outings from him, next year's rotation looks much better.

Rafael Perez's outing was on the other side of the spectrum. Like Carmona, Perez was one of the major disappointments of the first half. And like Carmona, he'd gone back to the minors to regroup. His early-season meltdown blew out a major piece of the bullpen foundation, and all season the Indians have been trying to patch that breach. Jensen Lewis, also at the time considered a major piece of the 2009 bullpen, followed Perez in tonight's eighth inning; between them, the duo gave up two runs, plus an inherited run. A different left-hander (Tony Sipp) and a different Perez (Chris) now hold the positions that once belonged to Rafael Perez and Jensen Lewis, which may mean one or both of the duo will be cut loose by next spring. 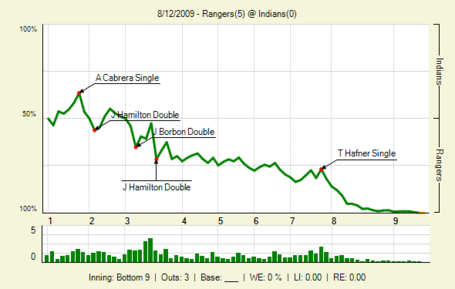