Tonight's win was contributed to by elements that until recently hadn't worked at the same time. Those elements (the rotation and the bullpen) have been turned over at least once since the season began, and there aren't many pitchers still in the same position they were at the beginning of the season, with the very good being traded away for prospects and the very bad being sent away for nothing more than the hope that their replacement couldn't be any worse.

Aaron Laffey was not in the Opening Day rotation, but was in and out of the early season staff during those fateful first two months. Now, after an ill-advised move to the bullpen and an injury, he's finally a full-time starter. And the best starter on a rotation that's probably not done turning over. Tonight he ran into some early trouble in the first, but got his ground-ball double play. He also pitched around a one-out Hank Blalock triple in the fourth. Other than that, he cruised through his 6.2 innings. He gave up more fly balls than he usually does, but they generally weren't hit hard. He was helped out in the seventh when Asdrubal Cabrera made two fine plays, both on grounders up the middle.

All the game's runs came in the bottom of the third, and was set up by back-to-back singles by Grady Sizemore and Asdrubal Cabrera and cashed in by a Travis Hafner single and Luis Valbuena double. Jhonny Peralta also drove in a run by taking a walk, and Trevor Crowe ended the evening's scoring by driving in a run on a sacrifice fly.

After Laffey departed, Joe Smith and Tony Sipp shut down the Rangers in a way that seems foreign to one who's used to watching Indians relievers at work. Smith finally seems to be executing his pitches the same way he did with the Mets, and Sipp looks like he's improved his control enough to bring his slider into play. 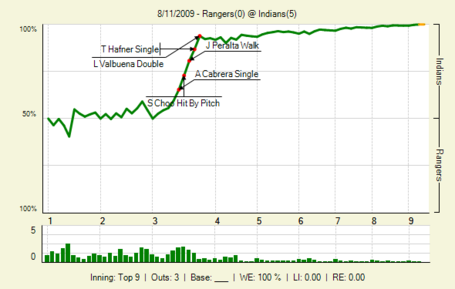