Now we're into that awkward phase, where the core players that were going to be traded have been traded, but the prospects that are supposed to take their places haven't come up yet. Hence tonight's lineup, with Wyatt Toregas catching, Chris Gimenez at first, Trevor Crowe in left, and Jeremy Sowers on the mound. And the Indians almost pulled off a win.

Rick Porcello, the best pitching prospect in the 2007 draft, showed the Indians a preview of what they can expect over the next six years. The Tigers were able to pick Porcello late in the first round because they were willing to go above MLB's "suggested" slot value, which earned them Bud Selig's ire... and Rick Porcello. The 20-year-old spent just a year in the minors, and made Detroit's Opening Day rotation. Despite being on a very strict pitch count, Porcello went eight full innings, allowing just four hits. 15 of the 24 Indian outs came on the ground.

Jeremy Sowers again started very well, not allowing a hit until the fifth inning, but things really fell apart for him then. He allowed three base runners and a run in the fifth, and four base runners in the sixth, and another run. That the Tigers didn't break the game open during those two innings was a minor miracle. After Sowers escaped the sixth, Justin Masterson made his Cleveland debut, going the final three innings of regulation without allowing a run. Justin will be stretched out into a starter over the next couple of weeks, and given that he'll probably be taking over for Sowers in the rotation, it makes sense that he lines up with Jeremy's starts.

The Indians spoiled Fernando Rodney's perfect record in save situations, tying the game on an Asdrubal Cabrera triple and a Jhonny Peralta sacrifice fly. They had opportunities in each of the extra innings, but only scored one run, and that was after Detroit had taken a two-run lead. Jose Veras allowed the two runs in the twelfth. The damage was largely self-inflicted; he walked the first two batters of the inning, and also balked home a run. That balked-in run was the difference in the game. 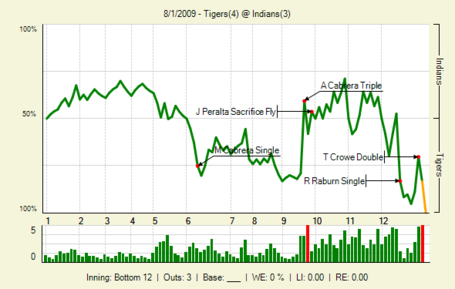