Tonight was the first night in a new era for the Cleveland Indians. And yet, oddly, nearly all of the pieces remained the same.  In a game that lasted into the 13th inning, Grady Sizemore got on base four times.  Asdrubal Cabrera, Shin-Soo Choo and Jhonny Peralta managed an 8-20 effort (including a 2B and a HR from Cabrera).  Fausto Carmona returned for a 5 inning, 2-run effort.  But oddly, at the end of the game, it was a 4-inning (scoreless) effort from Ohka that got the win.  That, and an RBI single from Jamey Carroll folllowing a 2B from Jhonny Peralta won the game.

So who is this team? Are we the vestiges of an imaginary contending 2009 team?  Are we the kindling of a contending 2010 team?  Or are we just the fiiller...the baseball moments which fill the time between significant baseball/life moments in the lives of alll of us watching.  I don't know.  I don't claim to know.  But I do know the remainder of this season has changed because of what the past week has suggested about next season.

Tonight we won because players didn't give up. Ohka, who isn't likely to be around next year, didn't give up.  Jamey Carroll, who also isn't likely around for long, hit the game-winning single.  Hopefully someone will step into those performance roles. This teams needs leaders, and the next 6 weeks aren't a bad time to audition.

It is the triple hierarchy of baseball that is working against us tonight.  We won the game, but we have acknowledged our loss in the lottery for the playoffs, and therefore our chances at real success this season.  And, if you really are feeling realistic or pessimistic (depending on your level of optimism), tonight marks the end not just of 2009 but also of 2010.  I'm not fully willing to buy into that....but....the future of the Indians has changed.  We are entering into a new era. One in which guys like Grady Sizemore and Asdrubal Cabrera are expected to be the veteran leaders, not the young achievers.  And who will step in and fill those young voids...well, there are lots of options, and not too many answers. 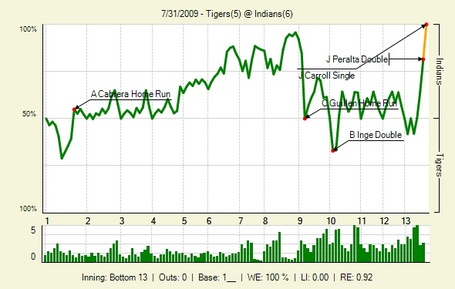