The Indians salvaged a win from their series with the White Sox by prevailing in an offensive fireworks show. The Indians hung 9 runs on the White Sox in the first 2.2 innings of play and on the day collected ten walks. Of course, the Indians pitchers weren't much better, as David Huff couldn't do much of anything right as he surrendered 8 runs in just 4.1 innings of work.

Surprisingly, the Indians bullpen actually came to the rescue, finishing out the game without allowing another run. It was probably a "positive regression" game for a couple of guys; I mean, Joe Smith, Wood, Betancourt, these guys probably have some decent runs in them over the next 76 games (or more, depending on how far we advance).

I want to take a moment to speak to David Huff. Mr. Huff, I don't know what your deal is, and I know that some people in these parts think they've detected improvement from you, but, well, this isn't going to suffice. You walk too many batters and you give up too many hits. All I'm saying is that if you don't course correct, you can look forward to the life of Jeremy Sowers. And, despite what Sowers says, that's a miserable life. 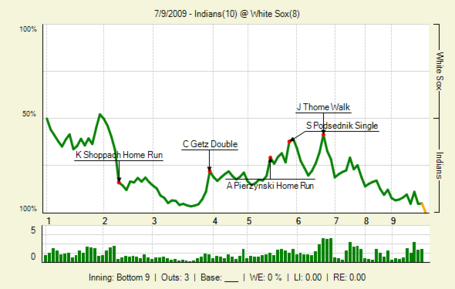 If you're looking for me to say something nice, Chuck Lofgren went 7 scoreless today with 6 K's and a BB. However, if Sowers and Huff have taught me anything it's that lefties in the minors need to be examined with a grain of salt.

Next up: Clifton showcases himself against Edwin Jackson, who is arguably having a better season than Cliff. Sigh. 7:05 in Detroit.