Some very annoying but persistent truths have come out of the last month. One, that Jeremy Sowers is not a starting pitcher, and two, that no matter how many times the entire bullpen is swapped out for a new cast of bodies, the results remain the same in the late innings.

Jeremy Sowers did a good job against the White Sox for five innings, but in the sixth, when he faced the Chicago order for the third time, he fell apart again. Instead of a pitch count, times through the order should be used in determining the length of his starts, if any remain. Chris Perez was brought in to restore order, but instead he gave up the lead in one at-bat. Paul Konerko blasted his second of three home runs - this one a grand slam - to put the White Sox ahead 5-3. Perez Right would give up another run on a Gordon Beckham double. Needless to say, both the Cardinals and Indians haven't gotten much production from their recent trade, as DeRosa's on the DL with a wrist injury, and Perez has fit right in among the other flaming wreckage that currently makes up this bullpen.

To top things off, the latest reliever, Winston Abreu, also made his Indians debut in typical style, giving up four runs on two home runs. The 32-year-old had great AAA numbers, but hung a few sliders tonight that major-leaguers don't normally miss.

The Indians did a decent job against Mark Buerhle, and made a half-hearted attempt to come back in the late innings. Grady Sizemore hit two home runs, Shin-Soo Choo doubled and homered, and Travis Hafner another good night at the plate, going 2-for-4.

To make room on the roster for Aaron Laffey, the Indians optioned out Rafael Perez, who has again fell into his well-worn rut of wildness. 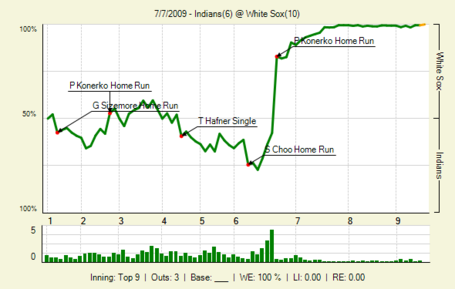