Despite have one of the league's most productive offenses, the Indians just don't score when Cliff Lee pitches. Today the left-hander fought control issues throughout the game (he walked four in six innings), but limited the damage to three runs. Normally that would be enough for the Indians, for they average over five runs per game.

Gio Gonzalez, who was traded three times while he was in the minors, (2005 (Jim Thome), 2006 (Freddy Garcia), and 2008 (Nick Swisher)), was the most impressive of the three young pitches who started for Oakland this series. Gonzalez relied heavily on his curve, and that pitch had Indians hitters off balance all game. He struck out 8 in six innings of work, his best performance as a pro.

The Indians held both Travis Hafner and Victor Martinez out of the lineup. Hafner was sitting to rest his shoulder, and Victor to give him a day off to help him recover from a prolonged slump (.195/.306/.378 over the last four weeks). During the game, Victor was named to the AL All-Star Game, the only Indian to make it.

Before the game, GM Mark Shapiro announced that there would be no coaching changes until at least after this season. While the announcement does remove any uncertainty as to the immediate future of Eric Wedge and the rest of the staff, I don't really know what the next three months is going to tell Shapiro that he didn't already know. The Indians are pretty much in the same situation now that they were last season, with the division race already over for them, and three months of looking at young talent ahead of them. Wedge has done a good job working young kids into the mix (as long as likes them), but he hasn't done well keeping teams in the race early in the season. Unless Shapiro just wants to keep him around for three months to do what he does best, I don't understand the move.

Next Up: A day off, then a trip to Chicago. 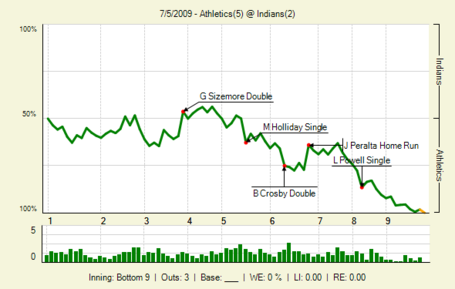