Just when all is lost, count on the Indians to give you an entertaining game to keep you hooked. Tonight the Tribe lineup (sans Victor Martinez) put on a July 3rd fireworks display, collecting 15 hits, 8 of them extra-base hits. Oakland starter Trevor Cahill got ripped for 8 runs (5 of them earned), and was out after 3.2 innings. After Cahill left, four more Athletics pitchers would make appearances, and the Indians scored runs of three off them.

Asdrúbal Cabrera had his first good offensive game since returning from the Disabled List, smacking two doubles. Ben Francisco, perhaps knowing that Matt LaPorta is a phone call away, collected three hits, and Travis Hafner hit another home run. But the night belonged to Shin-Soo Choo, who hit two home runs and a double, driving in seven runs in the process. Choo is quietly having a fantastic all-around season, and now that we're a full year into his breakout (with an offseason half-way through for pitching staffs to adjust), you have to consider his production sustainable. He's currently 7th in the AL in Runs Created, and only Jason Bay has a higher RC among outfielders.

Hitters are adjusting to David Huff, but tonight all Huff had to do was to limit the damage, put in 5 or 6 innings, and get the heck out. He did that, defusing a couple innings that could have turned out much worse than they actually did.

A nice sidelight was to see the Perezes have better outings. Perez Right got some generous swings from the A's, including one on a helmet-high fastball, but he was much more composed than in his last appearance. Tonight's a much better example of what you're going to get from Chris Perez. 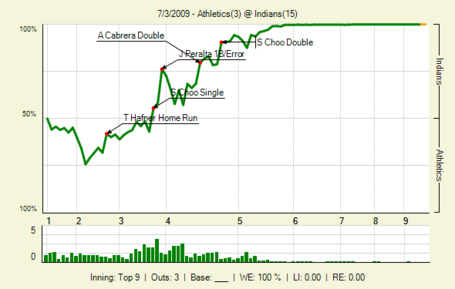