The offense continued to churn along, but tonight the eighth inning reared its ugly head yet again. But even despite giving up four runs in the eighth inning, the Indians had a very good opportunity to tie the game in the ninth inning.

David Huff gave up three runs in the third, but thanks to a great defensive play, the damage was limited to just those three runs, and he continued into the eighth inning. After David retired the Angels in order in the seventh, Eric Wedge, seeing the upcoming matchups, sent Huff back out the next inning. At this point Huff had thrown about 100 pitches, and although the bullpen problems have been widely documented, I thought going to the pen was a better risk than to trot back out to the mound a tiring young starter.

Alas, Huff allowed the first two Angels to reach base, setting the stage for a big inning. Joe Smith was called upon with runners on first and second and nobody out, and although he allowed the tying run to score, got a double play to quiet things down. But Tony Sipp, brought on to get the final out in the eighth, walked the first two batters he faced, and then gave up a back-breaking three-run double to Gary Matthews, Jr.

Despite the meltdown, the Indians almost took advantage of an Angels implosion. Brian Fuentes, who has done an excellent job closing games for the Angels this year, for the second night in a row couldn't retire a batter. He walked Andy Marte, gave up a double to Asdrubal Cabrera, a single to Jamey Carroll, and walked Shin-Soo Choo. Angels manager Mike Scioscia removed Fuentes, bringing in Jason Bulger to try to clean up a bases-loaded mess. Victor Martinez was next up, and he grounded into a double play that would not normally be turned on most other major-leaguers. A run scored, but now there were two outs, and Jhonny Peralta would need to drive home the tying run with a base hit. Instead, he hit a grounder to short to end both the game and the Indians' five-game winning streak.

Andy Marte made his 2009 Indians debut tonight, playing first base. Assuming no other major trades happen, he's likely to share playing time with Victor Martinez the rest of the season, and make an occasional start at third. The Indians aren't really looking at his defense, but his hitting, since he has yet to show that he can hit major-league pitching. 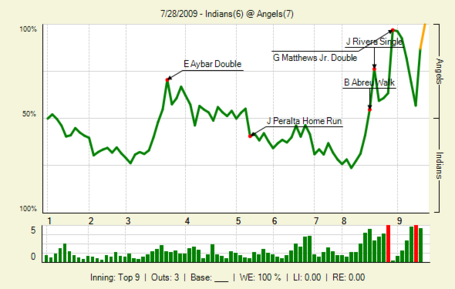