Grady Sizemore was out because he was sick. Travis Hafner was out due to a scheduled day off. And just before gametime, Ryan Garko was dealt to San Francisco. In other words, the Indians were playing with essentially no bench, not usually a recipe for twenty hits. But the Tribe offense has been hitting extremely well this road trip from top to bottom, with the glaring exception of Victor Martinez. Ben Franciso, normally a strict pull hitter, has been hitting the ball with authority the other way, Jhonny Peralta is finally getting hot, and even Chris Gimenez has been contributing.

Carl Pavano was making his first start since being blitzed in Toronto, and after a very good first inning gave up back-to-back-to-back home runs in the second. To his credit, he stuck around through the sixth inning, struggling for every out. When he left the game, the Indians were down 6-4, but still in the game. That two-run margin was the result of two blown calls, for two Angels who were attempting to steal second were incorrectly called safe, and came around to score.

The Indians threatened to score almost every inning. They scored two off struggling Angels starter Joe Saunders in the second inning, and scored single runs in the third and fifth innings. Saunders left after five, and although the Indians continued to collect base hits, couldn't break through against the Angels bullpen. But in the ninth, against closer Brian Fuentes, the first two Indians reached, bringing up Victor Martinez. Victor had to that point gone 0-4, the only starter not to collect a hit, but he got around on a Fuentes pitch and drove it over the left-center field fence, putting the Indians ahead. Jhonny Peralta then capped a four-hit night by following with a home run of his own. 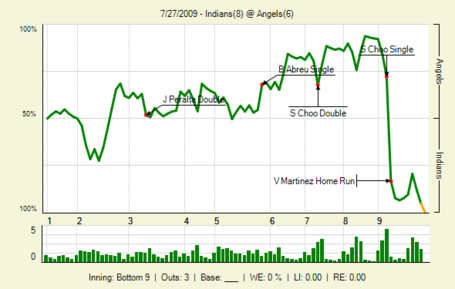