And so the annual second-half surge continues. Today the Indians finished off their best series of the season by mashing the Mariners 12-3. In sweeping Seattle, the Indians won each game by at least seven runs, and in each game the starting pitcher went at least seven innings. When the margins are that much by the end of the game, it doesn't really matter who you have in the bullpen.

In today's game Cliff Lee gave up a couple of runs in the first inning and cruised after that. He retired the Mariners in order in innings 2, 3, 4, and 5, and left after the seventh having thrown 99 pitches. If the Indians are looking to deal him (and they're certainly talking, given the recent stories), his value can't get much higher than it is presently.

The biggest surprise of the weekend, however, was the beating the Indians offense gave to the Seattle pitching staff. The Mariners came into this series sporting the lowest staff ERA in the American League, but that mark took a hit after the Indians scored 31 runs over the three-game series. Today the Tribe hit four more home runs, including a Jhonny Peralta grand slam. Every starter save Kelly Shoppach collected a base hit, and Shoppach walked twice. Ben Francisco went 3-for-5 with a home run and a double; he's picked an excellent time to get hot, as you would think the latest Matt LaPorta will be returning to the majors will be after the July 31st trading deadline. 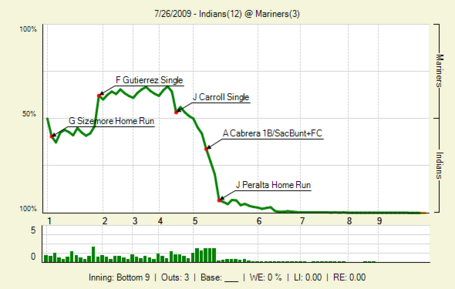