Aaron Laffey is potentially one of our more important question marks looking ahead to the 2010 season.  Can he be counted on to fill one of the spots in the rotation (possibly a Cliff Lee-less rotation)?  Tonight was just Laffey's 7th start this season with Cleveland, in part owing to his diversion to the bullpen in May.  Tonight's start, after a shaky first inning, was his best effort for the season (7 innings, 3 hits, 3 walks, 7 Ks, zero runs).  Of the 6 baserunners he allowed, half of them were erased via groundball double-plays.  Throw in his season high 7Ks, and 17 of the 21 outs he recorded came via groundball or strikeout.  That is a legitimate and welcome positive.  I think it is pretty clear the decision to trade or not-trade Cliff Lee will depend almost exclusively on what is offered up for him - but maybe a start like tonight from Laffey will lubricate the decision making parts of Mark Shapiro's brain a little bit.

The Indians took an early, 2nd inning lead thanks to a couple of hits (including a Ryan Garko double) and a Ben Francisco sac fly.  The game remained close until the 7th, when the bottom part of Cleveland's lineup began to unravel the Mariners pitching staff.  Jhonny Peralta started the inning with an innocent enough looking single (one of 3 in the game).  But this was followed by a no-doubt blast from Travis Hafner, his 10th of the year and first since July 3rd.  Two batters later, Ben Francisco also went yard, to raise the Indians lead to 4-0.  Following a combined Joe Smith/Tony Sipp outing in the 8th, the Indians power barrage continued in the 9th. Ryan Garko followed up Peralta and Hafner singles with a 3-run blast.   Jamey Carroll provided the cherry on top with his first shot of the year in the following at-bat.  A few hits and a Grady Sizemore slide at the plate later, the Indians raised the lead to 9-0.  A few looking Ks later, Chris Perez closed out the 9th to give the Indians a shutout of the Mariners.

There are many possibilities for what might happen over the next week, but tonight was a pretty good night.  The Mariners are a decent team but one probably clinging pretty tightly to any hope of contending.  Tonight's victory over Seattle might just be the inauguration of the Tribe's party-spoiling campaign. 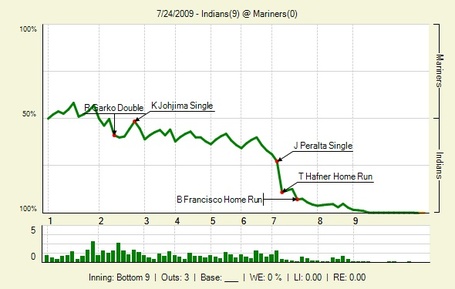