David Huff turned in one of his better starts of the season today, going 7.2 innings and giving up 4 earned runs. Ultimately, Huff still looks like Jeremy Sowers in that it's unclear what his long term plan for success is. Huff 'pitches to contact' but he also seems to pitch to 'hard contact.' As our resident Jayson Stark, FredOx, pointed out:

Rare territory: David Huff is only the second Tribe pitcher since 1954 to pitch at least 7 innings and give up 7 or more XBH.

The offense also showed up, or at least Shin-Soo Choo showed up. Choo tripled in the 5th to bring in two runs and then scored on a Victor Martinez groundout with a little heads-up base running. Kerry Wood came in to nail down the 5-4 win and looked fine after drilling Alexis Rios in the head with an 0-2 pitch. When watching Wood it's pretty obvious that there's still a dominant reliever in there; perhaps he's just trying to frighten 2010 opponents with these control issues?

A good win for the Tribe: solid starting pitching out of a youngster, solid relief out of Joe Smith and Kerry Wood and a solid day for the offense. While the trade talk is the big news of the day, it was nice to see the team win its first road series since the first week of June in Chicago. 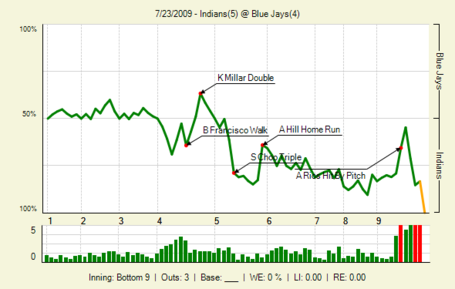 Tomorrow, the Indians travel to Seattle where Aaron Laffey will face Erik Bedard at 10:10pm.