Carl Pavano got lit up at the wrong time. Sure, there's no right time to get rocked, but a good outing would have increased his trade value in the eyes of teams looking for a starting pitcher, but without the funds or talent to go after Roy Halladay or even Cliff Lee. Instead, Carl left in the fifth after giving up 7 runs on 7 hits (four of which were home runs). Pavano hadn't pitched since before the All-Star Break, so maybe rust had a bit to do with it. When C.B. Bucknor is behind the plate, the position of the strike zone can never be known with certainty, so that uncertainty also had something to do with Pavano's outing.

The Indians had a good offensive game, and briefly got back in the game after Luis Valbuena hit a three-run homer in the sixth inning. But Jose Veras gave those three runs right when he gave up a three-run homer to Marco Scutaro (his second of the game). Veras has fit rather comfortably into the Indians bullpen. 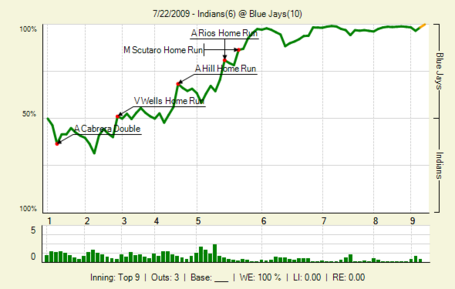