Every five days, the Indians are a good team. I know it may seem like I'm stretching things a bit, but if you consider that not only does Cliff Lee have an ERA about half of any other starting pitcher on the staff, but he often takes the setup relievers out of play by going deep into the game. The defense is still crappy, but having Lee on the mound takes away, at least for one game in five, most of what has ailed the Indians all season.

The problem this year with Lee has not been what he can control, but what happens when he's not on the mound. The Indians haven't given Lee much run support at all, and that trend stayed true tonight. Toronto starter Brett Cecil struggled through his seven innings, but pitched just well enough to keep the Indians off the scoreboard. The rookie struck out 9, but walked 4; he was seemingly in trouble at all times, and the Indians blew several opportunities to not only take the lead, but to chase him early in the game. Meanwhile, Lee cruised through his frames. Cliff fended off a couple of leadoff doubles, but otherwise had no trouble until Scott Rolen took him deep in the seventh. That one mistake, though, seemed for a while the final margin, for the Jays took a 1-0 lead into the ninth.

Eric Wedge went for broke in the ninth, and it almost cost him. He pinch-hit Ryan Garko for Kelly Shoppach, and Garko singled to start the inning. After sending in Luis Valbuena to pinch-run for Garko, he ordered Grady Sizemore to bunt the runner over to second. Grady bunted too strongly, and Lyle Overbay had a play at second. Had he made a decent throw, I'd probably be recapping another tough Cliff Lee loss. Overbay, however, gave the Indians life by throwing the ball into the outfield, and the Indians not only got the tying run into scoring position, but the go-ahead run as well. It was a bad decision poorly executed, but the results were great. Toronto walked the bases loaded to set up a force at home, which came in handy, for Shin-Soo Choo grounded to third, and Scott Rolen threw home for the first out. Now, with a struggling and slow Victor Martinez up, the Indians were one groundball away from another loss. But Victor doubled down the line, two runs came home, and the Indians took the lead.

There was no way in The Bronx Eric Wedge was taking Cliff Lee out of the game for Kerry Wood, not after how well he'd pitched not only tonight, but all season. Lee had little trouble in the ninth, and finished off another almost flawless start. 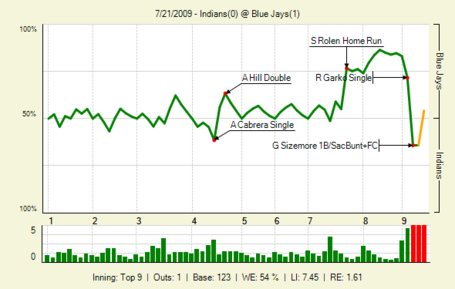