It is a holiday weekend and I am still living quite a few hours in the future, so this week's edition of Early Weekend 6-Pack will be very early (with appropriately chosen beverage below).

1. Eric Wedge is in Hall of Fame company

In 2007, Eric Wedge coached the Indians to an impressive .593 winning percentage.  Going into Thursday night’s game, the 2009 Indians are winning games at a less impressive .388 clip.  If that .200+ drop-off in win% in a 2-year span seems impressive, that’s because it is.  I looked at managerial records over the past 50 seasons, and it turns out this feat has only been equaled once.  This is obviously a difficult list to get on, because as that gap might suggest, you have to go from coaching a very good team (~.600) to a very bad team (<.400) in a short amount of time.  Given roster sizes and player movement restrictions, even in the era of free agency there tends to be a lot of continuity on a roster from one year to the next, so such a rapid change doesn’t often overcome the forces of inertia. Quite a few managers have come close.  Dusty Baker did it in three years between 1993 (.636) and 1996 (.429) with the Giants.  Phil Garner did it in three with the Astros, 2004 (.649) to 2007 (.443).  Cito Gaston did it in three following the Jays last WS title in 1992.  Tony LaRussa is good enough to have had such a drop over a 3-year time span twice, one with the White Sox in the mid-80s and again with in the early 90s.  A few others got fired too early in the third season to count (i.e. Gene Lamont, Buddy Bell, Don Zimmer).  But only one other coach has done it in 2-years, and that is HOFer Sparky Anderson, who saw the Tigers go from a .605 team in 1987 to a .364 team by 1989.  So Wedge is truly in the company of legends.  Now there is one coach who has actually topped this, and accomplished the task in just a single season.  I probably don’t need to remind you, but Jim Leyland coached the 1997 Marlins to a .568 record and the eventual World Series title, only to come back in 1998 and coach the AA Marlins to a pathetic .333 record.

Speaking of records – here is the team’s record when different individuals have appeared in the game.  The "best" record goes to Matt LaPorta, who in his brief stint in , helped the team to a near .500 (6-7) record.  Way to go Matt! The worst record title is shared by Travis Hafner (10-24) and Josh Barfield (5-12).

It’s only the half-way point, but at least according to UZR, the Indians defense is on pace to being 51 runs worse than last year, helping make Cleveland one of the most underperforming teams in baseball.  According to the numbers, these are the four biggest culprits:

The Indians best defenders so far; Jamey Carroll (+3.8) and Jhonny Peralta (+2.9).  Note: This is just one metric for measuring defense and half a season, and for many of these guys less than that, is generally not considered a large enough sample to be particularly reliable.  I'd be interested how these numbers match up with people's perspectives...I haven't seen enough games live to say.

5. Can I get two Wegz with that LaPorta?

The Indians full-season minor league teams all have three full months in the books.  Matt LaPorta had the team’s best month of April (1.103), while Nick Weglarz beat off some stiff competition from a number of players to claim the best May (1.055) and June (1.007).  There are a number of other high performers, of course.  Carlos Santana has been steadily good all season.  Jordan Brown and Andy Marte both had big Mays.  Abner Abreu screamed back from a terrible April with months of May and June not far behind Weglarz before separating his shoulder.  Lonnie Chisenhall has been solid.

6. The future looks different when you get there

One of the things Baseball America does every year when it produces its organizational top 10 lists is put together a mock-up of what the team’s lineup might look like 3 years in the future.  Here is what, in November 2006, they projected as the Indians 2010 lineup:

Ahh...back when the Indians future was so clear.  I actually think they did a pretty good job with this.  They correctly predicted Victor’s transition to first base, while being surprisingly optimistic about Jhonny staying at SS.  They got the easy ones of course, Grady in center and Hafner at DH, but also pegged Choo in RF.  McBride as catcher was obviously a fail...why people love that guy is something I don’t entirely understand.  Barfield did, coming off a great good rookie year in seem like a reasonably safe call.  Marte was still one of baseball’s top prospects.  Crowe...see McBride.  They may very well have 40-60% of the starting rotation correct.  Adam Miller, more optimism.  I’m not sure why they thought CC would both still be a #1 starter and still be with .

It’s hard to pretend I don’t know what has happened since November 2006 and try to compare how good I thought this team would have been versus how good I think our projected 2010 team currently looks.  It’s probably impossible to match my view of the above projected starting rotation (it is truly a dream world where Jake Westbrook is our #5 guy), but I think I like our offense better.  Put LaPorta in for Crowe, Santana (at least by the end of 2010) in for McBride, shift Jhonny left and put Droobs and Valbuena up the middle...and I like that lineup a lot.  The pitching, though... 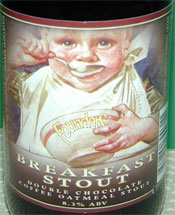