Watching the Mariners beat the Indians in three games out of four was rather instructive. Seattle doesn't have much of an offense, but because their pitching staff is the best in the league, and despite a lot of errors, has been one of the better teams in turning balls in play into outs, has managed to stick around in the race. The Indians, meanwhile, are pretty good offensively and horrible in everything else, and on track to lose 100 games.

Aaron Laffey was probably a couple hits from being taken out of the game in the first inning. But he got out of the inning giving up just the three runs, and settled down, giving the Indians five shutout innings. I can see a bit of light at the end of the starting pitching tunnel, with Laffey back in the rotation and Jake Westbrook and a supposedly fixed Fauso Carmona on the cusp of joining the Indians. Hopefully there's only a couple Tomo Ohka and/or Jeremy Sowers starts left to endure.

After Laffey left, Joe Smith worked out of a small jam in the seventh. In the eighth, though, Franklin Gutierrez singled off Rafael Betancourt, should have been thrown out at second but wasn't, and eventually scored the go-ahead run on a sacrifice fly. Kerry Wood worked the ninth, and although he got himself into a jam, should have have got out unscathed had Asdrubal Cabrera turned a double play. A couple plays, neither of which were errors, cost the Indians two runs in the last two innings of the game.

Ryan Garko was in the outfield again today. The only explanation I can think of for putting him out there is to showcase him for a trade. Otherwise, why not send down Chris Gimenez and recall Matt LaPorta or even Jordan Brown if you need another outfielder? 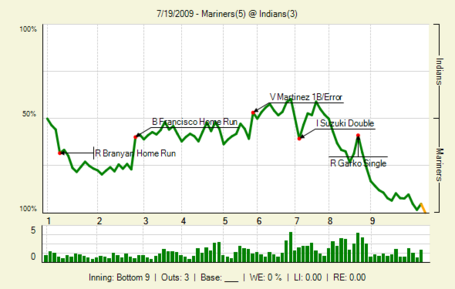