In an unlikely revenge scenario, Franklin Gutierrez has absolutely murdered the Cleveland Indians this week. Gutierrez has only three hits in the series, but those three hits have been a double and two home runs. On top of that, Franklin has been predictably stellar center field, including robbing Asdrubal of a no-doubt double today.

Tonight, the Indians wasted a stellar start (7IP, 3 ER) from Tomo Ohka. The Tribe was only able to plate one run all day, despite outhitting the Mariners 8 to 5: a large part of this club's struggles over the last five seasons can be summed up by stupidly pointing out that they don't get hits at the right time. On the positive side of the ledger, Travis Hafner had two more hits today, and both Rafael Betancourt and Kerry Wood put in scoreless innings of work, with Wood being especially dominant in striking out the side.

If the Indians were going to make a second-half run, it needed to start about a month ago, but even those holding out hope for some Pyrrhic victories down the stretch might need to realign expectations. The Mariners seem poised for some pitching regression, but the Indians' inability to start the M's down that hill is right in line with the whole season. This Cleveland team is not going to have enough pitching to win games unless some very unforeseen things happen, and this team is wasting decent performances out of their terrible pitchers. I suppose there's no reason to kill hope now if you've kept it alive this long but, well, how about that Bryce Harper? 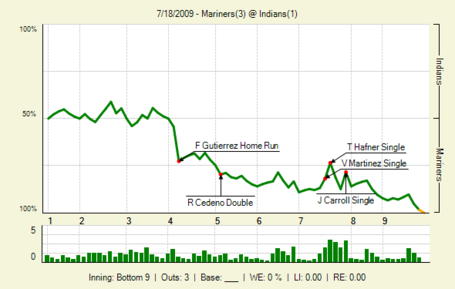