The Indians weren't going to win this one unless Cliff Lee was pitching, and unfortunately, he can only go every five days. Felix Hernandez, who has for several years now been one of the most talented pitchers in the majors, now seems to have put it all together. Hernandez allowed five hits and a walk in eight innings while striking out 8, and he actually looked better than that line indicates.

Grady Sizemore was responsible in some part for each of the Indians' two runs. In the sixth, he tripled and was driven home by a sacrifice fly. In the eighth he drove home Luis Valbuena from second on a double. Grady's back in the leadoff spot now, and more importantly, he's hitting. If Victor Martinez gets back on track, this could be one of the best offenses on a 100-loss team ever.

David Huff struggled through five innings against a unimpressive lineup, and the guys that relieved him weren't much better. Jose Veras gave up two runs (one earned) in his inning, and Tony Sipp also allowed a run. Chris Perez  was a bright spot, for he went through his inning with ease. A reliever has to pan out eventually for this team, right? 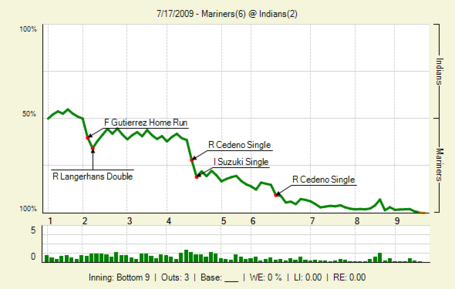