The Indians second half surge has begun. With the rotation reset, the Indians were able to put Cliff Lee on the hill tonight and Clifton did not fail to live up to his superstar status. Lee pitched a one run, complete game gem in which he struck out six batters and walked none. Let's sincerely hope that Lee takes a second before he departs Cleveland to teach at least one of David Huff, Jeremy Sowers, Aaron Laffey or Scott Lewis what mental switch he flipped at the end of 2007 to turn into one of the best starters in Indians' history. Also of mild interest was the fact that Wedge trotted out his most traditional and, probably, best defensive outfield behind Cliff: Franciscoster, Grady and Choo.

The offense gave Cliff more than he needed with four runs and a few key players seem poised to fuel yet another futile August ascent of the standings. Sizemore had another two hits today and is now OPSing 1.014 in the month of July; regardless of his injury status, Sizemore's ability to hit the baseball remains unencumbered as does his ability to make spectacular catches, on display in robbing Ronny Cedeno of extra bases in the third inning today. Peralta also rapped out two singles and coming into today he was OPSing .823 over his last 21 games. Finally, Asdrubal also had two hits and made what might be the defensive play of the year for the Indians in flipping a double play ball behind his back to Jamey Carroll to end the seventh inning. Despite his cultural obligation to remain obstinate and angry, Cliff Lee was seen smiling and laughing in the dugout as he watched the replay. 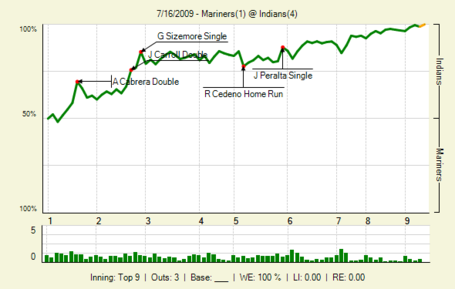