Ahh…it feels good to be home, Diary.  I’ve been gone quite awhile and it is nice to once again find myself in familiar surroundings.  And of course, a large part of that is being reunited with my love, the Cleveland Indians.  I certainly do love the Indians.  Warm summer days sitting in the sunshine, humid summer nights sweating out an exciting ninth inning finish.  And great, great mustard.

But of course it isn’t all Grady Sizemore sliding catches and understated Cliff Lee strikeouts.  In fact, things have been a little rough lately.  Actually, things have been awful.  There has been what seems like a never-ending series of chronic and unfortunate health problems.  And while financial times are tough on just about everybody these days, it seems like with Cleveland I’m always the one paying at the end of the night.  And of course there are family issues – Uncle Eric and Papa Mark just don’t seem to be on the same page these days despite what they keep telling us.  Grandpa Larry doesn’t seem to bring the same kind of gifts to family gatherings as Grandpa Dick used to (rest in peace…).  And ultimately, every time Cleveland and I get together, it just seems like we find new ways to disappoint.

And now, having been away, I guess I’ve been able to get a little distance…a little perspective.  And I guess, Diary, what I’m wondering (and I’m even scared just to say it), is whether it is all worth it?  Maybe it is time to move on?  Maybe it is time to see if there are other fish in the see out there for me?  I’ve never really been much of a soccer fan, but I hear PSG is fun.   You know, they’ve got that whole exotic French thing going for them.  Because it isn’t just that things seem hard now, it also kind of looks like things might be tough for a while to come.   Making decisions is so hard, Diary.  I’m glad I have you to talk to, to help me sort out what I should do, to figure out if I should stay with the Cleveland Indians or move on.

I guess the way to begin this is to think about what’s bad with our relationship and what’s good.  Some might say the trouble for Cleveland and I starts at home.  I like to think I’m not the jealous type, but Cleveland just seems to be allowing a lot of guys home these days.  498 of them actually.  I’ve compared with friends dating different teams, and indeed, that’s more than any of them.  That makes me a little sad.  Some of those guys coming home are no doubt related to Cleveland’s poor health.  But, and I know this makes me seems like a bit of an a#$hole, but I’m kind of tired of dealing with all these health problems and the difficulties they bring.  It seems like I spent all of last year dealing with those issues and I’m tired of it now.  And making it even harder is how many of those guys seem to come by late in the night, when I think Cleveland and I are headed for a great evening and a peaceful night’s sleep.  And despite the many different fixes we’ve tried to get around this particular problem (and believe me, we’ve already tried about 20 of them this season), nothing seems to work.  And in this area, the future looks really uncertain.  Cleveland keeps telling me the depth of our relationship will carry us through, but so much of that depth of experience seems to be experiences of failure…

But then again, our love life is still good.  In fact, compared to those same friends, I think Cleveland and I score more than all but a handful of them. In fact, we’re on pace to score more this year than all but one year over the past five.  And unlike those just mentioned woes at keeping rivals away from home, our scoring ability seems to have a bright future.  At the risk of being a little immodest, we have some pretty hot, youthful positions (I like to imagine a setup in the near future in which we spend nearly all of our time acting like we are still in the best part of our 20s).  And even some of our more tried and true standbys, which just a year ago seemed to be nearing the end of their effectiveness, once again seem to be producing their old magic.  But maybe this kind of thinking, how much we score, is a little too simple – a little too shallow.

Diary, I’m sure you realize (like I do) that there is more to the relationship between Cleveland and I than scoring.  One of those other things is certainly the way in which defend ourselves against the outside world.  Relationships are hard, with lots of people (haters) trying to constantly bring you down.  And I just can’t tell how good our defense is.  I feel at its heart, at its center, our defense is good.  But around the edges, the margins of our relationship, I think we struggle.  But there is so much fuzziness in figuring out our own shortcomings versus simply bad luck in our relationship, that I have a hard time understanding how to look at this.  I wish it was easier, Diary.  Maybe this is something all those smart people (supposedly) Papa Mark has surrounded himself with can help us out with.

And then there is our history together.  Cleveland and I have had so many good times.  Big events we have celebrated with crowds of others - it seems not that long ago (2001, anyway) that we were constantly in the midst of big, celebrating crowds (455 times according to my records) – and more personal events, shared by just the two of us.  And indeed, some of our best times have come pretty recently.  But, to be truthful, we have had a lot more bad times than good times I suppose.  And even those good times seem to have inevitably been followed by disappointments.

But there is something else to our relationship, Diary, something that needs to be considered.  And that is just that there is something that just feels right about the two of us together.  Something that says any other relationship would feel wrong, dirty.  I can just imagine myself waking up with someone else and slipping on a pair of unfamiliar socks (maybe Red ones, maybe White ones), and it just makes me want to retch.   And it isn’t that I’m one of these fatalists who views our relationship as my own personal Greek tragedy.  It’s just that I, even now, see the potential in our relationship as exceeding the cause for despair.  Where we have positives, they really seem like genuine positives.  And our negatives seem to be more genuine uncertainties than guaranteed shortfalls.  So I recognize that it won’t be easy.  That these next few months, maybe even the next year, might be difficult.  But I think they’ll be worth it.  Even now I can still imagine a time when we are sitting together in the early Fall, the leaves just beginning to pile up and the crispness of the night air taking on a new sharpess, sipping on the sweet champagne of life.  So I think I’ll stick it out.  I think we are meant to be together.  I think good things still wait for us in our future.  So I’ll enjoy the little moments of happiness in the meantime, and keep my eyes focused on the bright rising sun of the future.  Thanks, Diary.

P.S. That mustard really is good 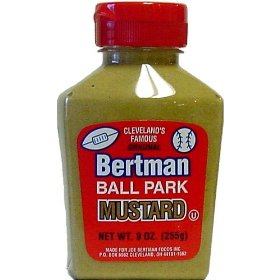