Tonight's game was a very entertaining contest, with lots of extra-base hits, close tag-out plays, a surprisingly good pitching performance, and some nice defensive gems. In other words, a rarity for this year's club.

Carl Pavano seems to have caught his second (or is it his third) wind. Being able to go eight innings while throwing 101 pitches while striking out six hitters along the way is hard to do. He did it by getting ahead of almost 90% of the hitters he faced, and throwing just over 70% of his total pitches for strikes. He also got some key double plays, including a strike out-throw out twin killing in the fourth. That double play killed a first-and-third rally, and he didn't have any serious trouble after that.

The Indians offense failed to hit a home run, but they did club five extra-base hits (including a triple), making good use of Comerica Park's spacious alleys. Asdrubal Cabrera and Grady Sizemore, the top two hitters in the order, had five hits between them, and Luis Valbuena hit two doubles. This recent lineup might be the most athletic one the Indians have had in a quite some time, with only three players (Martinez, Garko, and to some extent, Travis Hafner) station-to-station plodders.

Kerry Wood got the save despite walking the leadoff batter and giving up a two-run homer. I know it's tough to put yourself in a player's shoes, but when you're pitching to Placido Polanco with Miguel Cabrera on deck up three, I'd want Polanco to at least put the ball in play. But anyway, Wood retired the next three hitters in order to save the first Indians win over the Tigers in the last seven games.

Next Up: Ohka vs. Verlander. Hilarity will ensue. 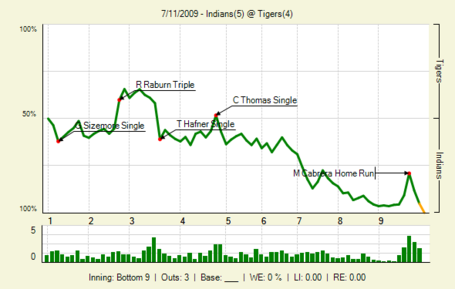