Cliff Lee pitched seven good innings, striking out eight.  He should have been done after six, as he'd already gone over 110 pitches, but Eric Wedge elected to send him back out for one more inning. It worked out, as Lee cruised through the seventh, but in my mind it was a dumb move. The Indians aren't in any kind of race, and Cliff Lee is by orders of magnitude the best starter the team has. I don't care if the All-Star Break's coming up, or you wanted to give Lee one more chance to get a win, at some point the sane portion of your brain needs to pipe up and say that you're going to need Lee to make 15 more starts this season to not lose 100 games, and 30 starts next season to make any pretense of competing in 2010.

Then there was the further adventures of Ryan Garko in the outfield. Garko made a very good effort on Gerald Laird's fly ball to right, but his best effort doesn't belong in a major-league outfield. And I'm not picking on Garko, since it wasn't his call to go out and play right field in one of the bigger outfields in baseball. If Kelly Shoppach catches every Cliff Lee start, and Victor Martinez is going to play first base when he isn't catching, then you have to bench either Garko or Travis Hafner when Cliff Lee starts. As a manager, you have to place your players in positions where they can best succeed, and trying to shoehorn Garko into the lineup in this fashion is just asking for failure.

Which brings me to this question: would not now be a good time to trade Garko? He's making $446K this season, but will be eligible for arbitration after the season. He's on a hot streak right now (he accounted for the Indians' lone run with a home run in the fifth), and would be a bargain bat for a contender looking for some cheap offense. And, if Mark Shapiro can keep from laughing while doing so, might sell another GM on his ability to play the outfield. You can then free up a roster spot for Matt LaPorta, since there's no service time issues at play any longer.

Anyway, after Lee left, Joe Smith gave up two runs in the eighth, the Indians rallied in the ninth but fell short, yadda, yadda, yadda. 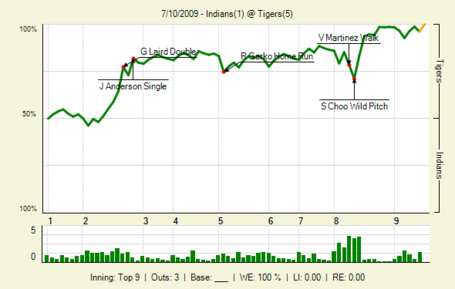