The length of its season is what gives baseball a dimension no other sport has. By watching your team on a daily basis, you get to know your team's players intimately, from their great abilities to their most annoying flaws. Each day brings a new game, another chance for victory. Or, when your favorite team stinks, a new and fresh reminder of it each evening.

Tonight was a very humdrum loss. Jeremy Sowers was his predictable self, doing well through the first couple times through the order, then falling apart after Chicago hitters caught on to his strategy. Indian hitters, who seem to have lost interest in working counts, were shut down by Jose Contreras, who was on the verge earlier this season of washing out of baseball entirely. To be fair, Contreras was hitting his spots well, and his last four starts have been markedly better than the six he made before going to the minors. But the Indians could have made his start much more difficult; he threw eight relatively easy inning, getting outs early in counts. And this wasn't the lineup of a couple weeks ago; tonight Grady Sizemore, Asdrubal Cabrera, and Travis Hafner were all in the lineup together.

The season's been over for a couple weeks now, but recently this team has descended to a new level. There's enough talent on this team, especially offensively, to make things at least respectable on a daily basis, but even that isn't happening. 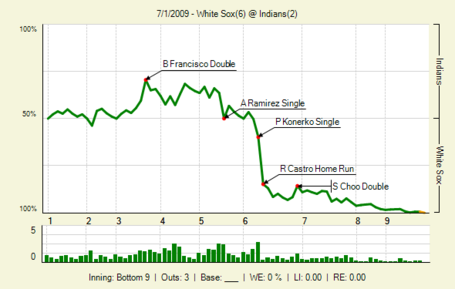