With tonight's win, the Indians aren't in last place for the first time all season. A lot of it has to do with Kansas City's freefall in the standings, but the Indians have also started to neutralize some of their early-season flaws.

At this point, every Cliff Lee start is just about a must-win. But for most of the game, it looked like Lee was going to be outpitched by Indians nemesis Brian Bannister. The Royals collected 11 hits off Lee in six innings, but if not for a blown call by the third base umpire in the sixth inning, Cliff would have held the Royals to two runs. As it was, Lee left the game in the sixth trailing 4-0, and it looked like he'd be the victim yet again of poor run support.

The Royals let the Indians back in the game in the bottom of the inning. With runners on first and third, Billy Butler made a throwing error on what could have a been a double play. A run would have scored anyway, but in this case the rally still continued, and there was still nobody out. After Mark DeRosa loaded the bases with a single, the Royals made another pretty dumb error; Travis Hafner bounced a ball to first, and although Butler made a good throw to the plate, Miguel Olivo pulled his foot early, and didn't get the benefit of the "neighborhood play." Now it was 4-2, and still there was nobody out. Kelly Shoppach then did his job, flying out to deep right, which plated the third run of the inning, and moving the tying run to third. Then Jhonny Peralta grounded wide of third, which meant that the Royals couldn't turn an inning-ending double play. The runner was forced at second, but the game was now tied.

In April and early May, a tie game going into the late innings might as well be a three-run deficit as poorly as the bullpen was throwing. But now a tie game means that the Indians actually have as good a chance of winning as the other team does. After Lee left, Luis Vizcaino, Rafael Perez, and Matt Herges combined to pitch two perfect setup innings. Perez had his slider once again making left-handed hitters look foolish, which is an excellent sign.

Mark DeRosa broke the game open with a grand slam in the seventh. Ben Francisco singled into the hole between short and third, and then after he was forced at second on a bad bunt by Jamey Carroll, Victor Martinez walked, and Shin-Soo Choo would have walked had Cruz's pitch missed his foot. That brought DeRosa up to the plate with the bases loaded and one out. Jamey Wright left a fastball up on the outer half of the plate, and Mark didn't miss it. 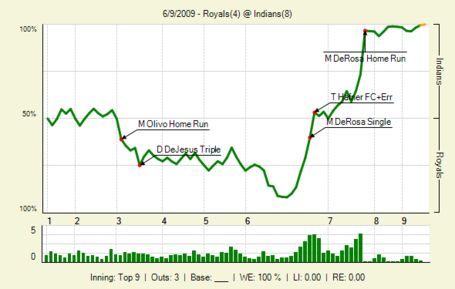