The Indians came into Chicago at the right time. Carlos Quentin is on the shelf, Jermaine Dye was suspended for two games, and the White Sox will start a five-game series starting tomorrow, so a couple of the regulars sat today. And to top things off, the Indians got to hit against Bartolo Colón, the gift that keeps on giving.

Both teams used a lineup more at home in exhibition season than a regular season game. The Indians sat both Travis Hafner and Jhonny Peralta, and took the opportunity to let Victor Martinez DH. But the Indians didn't have any problems with offense today, including the players who were replacing the regulars. In the second, Chris Gimenez and Luis Valbuena homered back-to-back, and the Indians repeated the feat in the fifth when Victor Martinez and Shin-Soo Choo went deep. Bartolo was done after that inning, and Ozzie Guillen, thinking of the double-header tomorrow, tried to steal some innings with rookie Wes Whistler. Whistler walked the first two batters of the sixth, and both of them scored. Guillen had to use his regular relievers the rest of the way.

David Huff flew after the fifth inning, but he did enough. He held Chicago scoreless until the fifth, when, with a 6-0 lead, he walked two batters and gave up a lead-splitting three-run homer. But thanks to Carl Pavano's complete game on Friday along with the off day tomorrow, the Indians could empty their bullpen. Greg Aquino went two scoreless innings, but Luis Vizcaino couldn't find the strike zone in the eighth. He was pulled with the bases loaded and nobody out for Rafael Peréz. Several right-handers were coming up, but Wedge called on Peréz to prevent Guillen from pinch-hitting guys like Thome and Pierzynski for them. Regardless of the strategy behind the move, it was a tough situation for Peréz to come into. But after walking in a run, he struck out the next two and got some help from Trevor Crowe to get the third out. Kerry Wood pitched a relatively smooth ninth, and the Indians won a key division road series.

Next Up: A Day off, then Lee vs. Bannister on Tuesday. 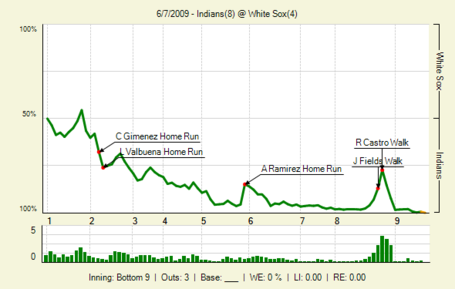