So the Indians got a surprisingly good start from Jeremy Sowers, and what did they do with it? Not much. They closest they got to having a big inning was Travis Hafner just missing hitting a Gavin Floyd pitch square with the bases loaded in the sixth inning. Floyd, who's been pitching much better since an awful April, went 6.2 innings, and though the Indians scored one of the runners left on base when he left, they didn't score again.

Fielding and base running errors cost the Indians two runs today, which was the difference in the game. In the second, Travis Hafner got a terrible jump on a Ryan Garko grounder and was thrown out at home. And in the sixth, a Jhonny Peralta throwing error and a Victor Martinez passed ball allowed home a White Sox run. The Indians have to take advantage of good starting pitching when they get it, but they didn't today. Which means the Indians are one loss closer to pulling out of contention.

I wouldn't be shocked if the Indians send Luis Valbuena down in favor of Matt LaPorta, especially now that Josh Barfield is back with the club. 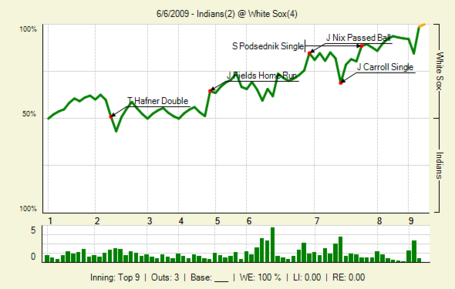