On the day the Indians sent the Fausto Carmona on an extended sabbatical, Carl Pavano, of whom not much was expected, easily shut out the White Sox, allowing just three hits. Chicago's bats have been dormant lately, having been shut out twice in their last series against Oakland, and Pavano took advantage of them by establishing his pitches in the strike zone early. White Sox hitters swung early in the strike zone, and made quick outs on weak grounders and pop flies. Those easy innings allowed Pavano, who normally loses his effectiveness before getting to 100 pitches, to throw his hundredth pitch with two outs in the ninth inning.

Travis Hafner was back in the lineup, and that meant Eric Wedge had to get creative in order to fit Ryan Garko in the lineup, since Kelly Shoppach was Pavano's personal catcher. He placed Garko in right field, and although US Cellular's outfield isn't that spacious, it was a defensive gamble. It worked, for Garko hit a home run in the sixth inning to push the Indians lead to 5-0. Wedge pulled Garko soon afterwards for a better defensive arrangement. Pronk hit a home run as well, lining a Danks offspeed mistake into the right field bleachers in the fifth.

The Indians right now have two hot pitchers in Cliff Lee and Pavano, and essentially nothing else in the rotation. But with Detroit losing tonight, the Indians, even at 24-33, are just 6 games back. Granted, there are four teams still ahead of them, which makes 6-game deficit a lot more difficult to overcome, but if the Indians can hang around until the end of the month, they have the talent to make a run at this division. They'd have absolutely no chance in any other division, but in this year's AL Central it's still anybody's season. The key is getting even mediocrity from Jeremy Sowers and David Huff, who are going to be in the rotation through at least the end of this month. 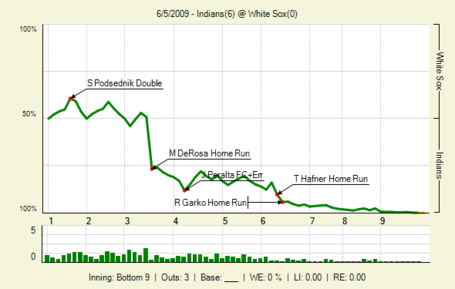