The time has come for Fausto Carmona to go to the minors. There isn't much to replace him, but at this point "not much" is better than "no chance," for that is the odds of the Indians winning a Carmona start. Today the Indians faced Scott Baker, a talented but struggling pitcher, and even with the Indians' emasculated lineup, had a good chance of winning the game had the game been in doubt. But since Carmona handed Baker an early 7-0 lead, there were no difficulties for the Twins starter to overcome, and nothing to worry about.

As much as it pains me to say this, having Tomo Ohka make a month's worth of starts is a better option for the team's short-term prospects and Fausto Carmona's long-term prospects. If this season is a lost cause (and it's looking like it with every passing day), then keeping him at the major-league level is even more of a waste. And let's face it, pretty much every scenario that had the Indians being a relevant team this year included Fausto Carmona having at least a good year. Losing CC Sabathia and Paul Byrd to free agency and Jake Westbrook to injury meant that the margin for error in the rotation, as deep as the rotation appeared to be, was nil. And although the bullpen derailed the first month of the season, fixing it won't turn the season around as long as the Indians have a rotation two pitchers deep. Cleveland might be "just" 7.5 games back, with no team in the Central running away with the division, but the pitching talent just isn't there to propel even an illusory turnaround. It might be July until help arrives in the rotation, and by that time it will have been much too late to salvage anything from this season. Carmona was the key to the rotation, and he's been one of the worst starting pitchers in baseball through the first two months. 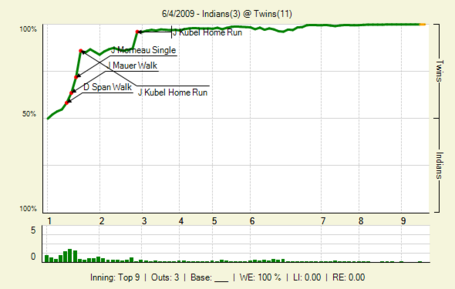