This week's early weekend 6-pack will be considerably abbreviated owing to time constraints (see below), but here it is.  My six favorite moments of the Tribe's season so far:

April 16, inaugural opener for the new Yankees Stadium.  A game in which everything went more or less like it was supposed to.  Lee equalled CC Sabathia through 6 before the Indians offense unloaded on the Yankees and sent their fans home early.  Classic.

So it turned out the game sucked - but Opening Day will pretty much make any top list I make every year simply because of what it is - the return of baseball, summer, hot dogs and beer outside, and all things good.

Maybe the only good weekend the entire season, so far?

4. Eavesdropping on the bosses during spring training.

This one is admittedly a personal guilty pleasure.  It might be even more interesting to eavesdrop on them these days...although probably less fun.

The last one I'm leaving blank in the hopes that good things are yet to come.  I take off Saturday for a 6-week stint in the far reaches of the internet hinterlands - meaning I'll pretty much be on a hiatus from LGT until mid-July.  Keep the home fires burning while I'm gone and hopefully the situation will seem less dire when I return.  I'm leaving the keys to the early weekend 6-pack around, though, so feel free to step in and fill the void while I'm gone.  Until then, here's a whole display case of beer. 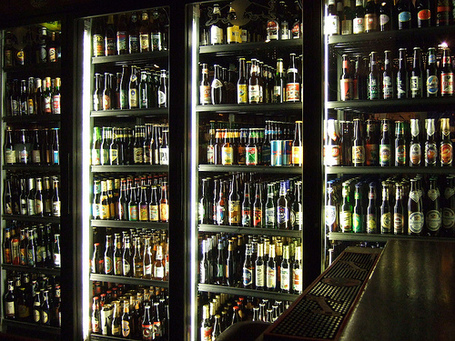