Cliff Lee, who has pitched almost as well this year as he did in 2008 (3.16 ERA), came into tonight's game with a 2-6 record.. The Indians simply haven't given him run support, even though scoring runs generally hasn't been a problem for the offense. But tonight Lee didn't have to worry about run support, for the Indians scored five runs early, and added on late.

The major turning point of the contest was the top of the third inning. After two outs, the Indians got three bloop singles in a row to plate a run, then a solid single to score one more, and finally a blast from Jhonny Peralta to score three additional runs. The Indians knocked out starter Anthony Swarzak the next inning, and went to work on the soft underbelly of the Twins bullpen.

Cliff Lee went eight innings, and could have gone the distance if needed, but by that time the Indians were up 10-1, so there was no need for him to pitch the ninth. 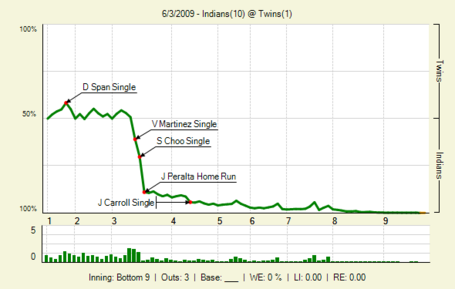