After an extended rain delay, the game today was finally called final with the Indians suffering yet another loss. Today's loss was out of the ordinary in that it involved an abysmal Cliff Lee performance. For whatever reason, Lee just didn't have it today and managed to to give up 7 runs on 11 hits over just 3 innings. He was relieved by this Mike Gosling character who has proven that he is in no way a better option than Greg Aquino, Vinnie Chulk, or any other waiver wire fodder the Indians can get their hands on.

The slow death march of 2009 continues and it's hard to know what to focus on; Lee wasn't ever going to repeat as Cy Young winner on a team like this but his performance ballooned his ERA to 3.39, nearly a half point higher than it was coming into today. On top of that, Lee's record is now 4-7 which means nothing except that he'll probably get even less votes, if you're into that sort of thing. 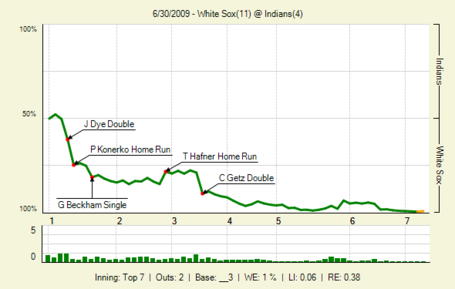 The Indians will play again tomorrow, with Jeremy Sowers facing Jose Contreras at 7:05.