The Indians started off the season an underachieving team, but thanks to a ridiculous amount of key injuries I don't think I can use that criticism anymore. Asdrubal Cabrera, who had been having an outstanding season, badly injured his left shoulder sliding into second in the first inning tonight. I'm no doctor, but it's almost a given that he'll be going to the DL. That would make 9 Cleveland players on the Disabled List, seven of which were on the Opening Day roster, including one-third of the Opening Day lineup. You can't blame the Indians' poor play for the first six weeks of the season on injuries, but since the middle of May, it's had a definite effect on the team's ability to win games.

David Huff, learning to be a major-league starter on the job, struggled to get through five innings. That meant the bullpen again had to try to keep the Indians in what was a 4-0 game. Tony Sipp, in his first appearance since his callup, was up to the challenge, pitching 2.1 scoreless innings. Greg Aquino, who was less than an afterthought going into the season, came back the night after throwing a lot of stressful pitches to throw .2 of a scoreless inning.

The Indians did make a game of it by scoring three runs late. Kelly Shoppach blooped a perfectly-placed double to right field to plate two runs in the seventh, and Victor Martinez hit a home run in the eighth. Later that inning, Mark DeRosa doubled, representing the tying run. The Indians pinch-hit Ryan Garko for Luis Valbuena, but Ron Gardenhire countered by bringing in Joe Nathan into the game for a four-out save. Garko got ahead in the count 2-0, but then jammed himself on an inside pitch and grounded weakly to second. That essentially was the Indians' last shot, for the first two batters facing Nathan in the ninth was Trevor Crowe and Kelly Shoppach, players who would have been pinch-hit for last month. 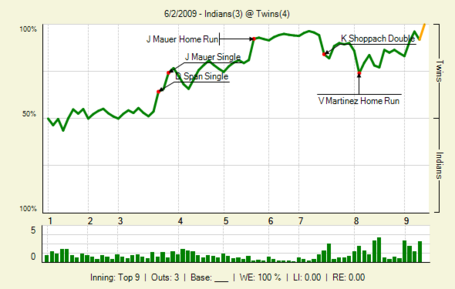