This was a well-pitched game until the ninth, when Chris Perez entered the game. This was Perez's first game with the Indians, and a 2-0 deficit seemed as good an opportunity as any to get him into a game. I'm sure the coaching staff figured on him being amped up, since the 24-year-old would be trying to prove himself to his new team, but I don't think anyone foresaw this (the bolded text is my addition):

Looking back at it an hour later, it seems more comical than frustrating. He gave up four runs, but gosh darn it, he did it with style.

Up to this point, the Indians were technically still in the game, but after Perez got done with things, the White Sox lead was 6-0, and instead of Bobby Jenks coming out, Matt Thornton came on to finish things off. The Indians scored three runs, but I'm not going to pretend that those three runs would have been scored off of Jenks.

Eric Wedge didn't get to see the ninth-inning fun, for he'd been run in the bottom of the seventh after arguing a close call. With the bases loaded, Ryan Garko hit a dribbler down the line, which was picked up by pitcher Gavin Floyd right on the line. The home plate umpire originally called the ball foul, but after conultation with rest of the crew, the call was reversed, with Garko being called out and the inning over with. Wedge naturally went ballistic, and you knew as soon as the crew chief made the out signal with his fist that Wedge was going to get tossed. I think the right call was made, but you could understand why Wedge was ticked off. 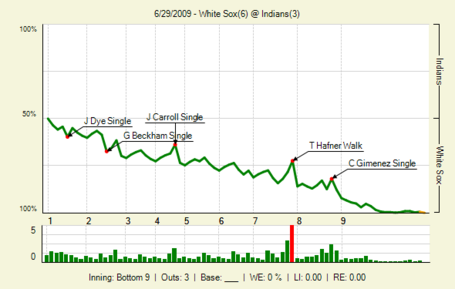