Tomo Ohka was on the mound, so this one was going to be a tough to pull off.

But the Indians had many opportunities against Homer Bailey that they failed to capitalize on. The right-hander may be young and talented, but tonight he was an awful pitcher. He consistently missed his target by feet, not inches, walking seven in five innings of work.

Second Inning, bases loaded, nobody out.

Third inning, runners on first and second, two out.

Fourth inning, runners on first and third, two out.

Those were the opportunities that, had they been taken advantage of, could have brought the Indians back into the game.

Jose Veras, recently purchased from the Yankees, made his Indians debut, striking out the side in the ninth inning. This season has made me very skeptical about troubled relievers being turned around by the Indians' coaching staff, but I was pretty impressed. Now he needs to do what he did in a meaningful situation. 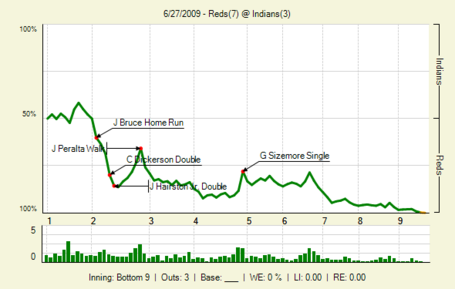