Wins like tonight are rather frustrating. Frustrating not because the Indians won, but because it shows you the possibilities had this team had just a modicum of starting and relief pitching.

Jeremy Sowers pitched into the eighth, which was a rare accomplishment for him. On top of that, he struck out season-high six, indicative of how relatively lively his stuff was. Normally Jeremy will do all right for the first time or two through a lineup, but then hitters catch on to his strategy. Tonight he had the stuff to augment his normal location-and-speed attack plan. With a normal bullpen behind him, Eric Wedge would have pulled him after seven innings, but the Indians manager allowed Sowers to return to the mound for the eighth because, frankly, a tired Sowers was a better bet that a fresh reliever coming through the bullpen gate.

It turned out that Jeremy was completely out of gas (he gave up two doubles to open the inning), so Wedge reluctantly signaled for Jensen Lewis, who did defuse the inning. Jensen went back for the ninth, for the Indians still were up by seven. This time he did the inexcusable: he walked the first two batters of the inning. Wedge pulled him, and now he's on his way to Columbus (see the story below). Tony Sipp came in and finished the game, striking out the side.

The Cleveland hitters, after going down quietly in the first two innings, rattled Reds starter Aaron Harang for seven runs (five earned) in the next three. Victor Martinez went deep for the second game in a row, and Ryan Garko, still visibly favoring his wrist while batting, hit a two-run homer. Two unearned runs in the fifth sealed Harang's fate. Thanks to Sowers' solid start, the lead going into the late innings was such that even this bullpen couldn't muck it up. 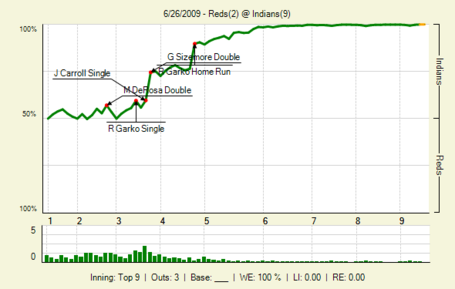