Do any of you remember the Choose Your Own Adventure Books? For those that don't, they were a series of children's books that gave readers a choice every so often, directing him or her to a certain page depending on that choice. If you made all the right choices, you got to read the 'good' ending. In other endings, you had lesser degrees of success, or even died.

This season is like a Choose Your Own Adventure book that doesn't have a 'good' ending. Sure, there might be clues along the way that you're progressing towards ultimate success (choosing to start Cliff Lee would get you most of the way through the story), but at some point, when it's the late innings and the starter's out of the game, you are met with a choice not between victory or defeat but only the type of defeat.

Congratulations! Your team escaped the eighth inning with the game still tied. The offense couldn't push a run across, though, and now you must choose which pitcher to send out for the ninth. Remember, if the Pirates score, the game's over!

If you decide to stay with Rafael Perez, turn to page 96.

If you go with Matt Herges, turn to page 97.

If you call on someone else in the bullpen, turn to page 98.

You stay with Rafael Perez, who got out the eight inning by getting a double play, think that his success would carry over into the next inning. Unfortunately, he walked the first four batters of the inning to force home the winning run.

What if you had chosen to turn to Page 97?

You bring on veteran Matt Herges, who at least has experience in these types of situations. But he gave up three straight base hits, and the Pirates win.

Well, the last option has to be the one, right?

Sorry, but no matter which pitcher you choose, your team will lose the game. Try to get a better bullpen next time, if you're even around for next time. 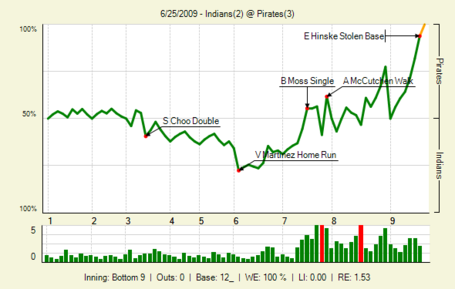