On June 5, Carl Pavano pitched a three-hit shutout in Chicago. In his three subsequent starts, he's been lit up, giving up nine earned runs against the Royals, six earned runs against the Brewers, and three runs (eight total) in 3.2 innings tonight. He briefly pushed his ERA under five after the Chicago start, but now it's back around 6.00. I think Pavano is running out of gas, for he has essentially gone four years since making it through a full major-league season. Early in the game, Pavano was hurt by errors and groundball singles, but in his last inning Pirate hitters were lacing line drives to the outfield.

When Pavano left the game in the third, the Indians trailed 7-0. Jensen Lewis, last year's closer, came into the game to milk some innings. Lewis has been one the few relievers to stick in Cleveland the entire season, but at this point he's up here simply because there are worse pitchers commanding attention. He gave up his ninth home run of the season to the first batter he faced. This season he's been giving up home runs about once every 4 innings. That's completely unacceptable for any pitcher, much less a reliever. But then again, he hasn't been as bad as many other relievers, so he's stuck around for three months. The Indians scored 6 runs in the ninth thanks to several errors, but deficit was too much for even a very crooked number to overcome.

So, as things stand. we have a rotation consisting of Cliff Lee, a rookie pitcher just learning the ropes, a bunch of injured guys, and the Columbus starting rotation. And in the bullpen, the Indians have a $10M closer in the midst of a week-long meltdown, with everyone behind him pitching just as badly. The offense is getting healthy, but it doesn't look like it's a match for the pitching staff. 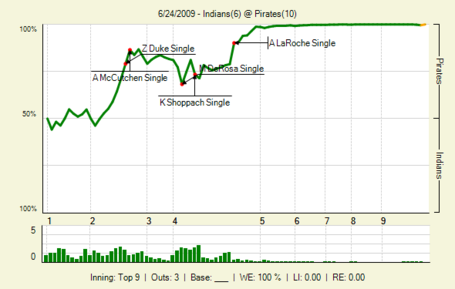