Before the morale-crushing ninth inning, the Indians played a very good game. David Huff pitched his best game as a pro, going eight full shutout innings, and allowing just four hits. Huff had come to the majors before he was really ready, but he's overcome the steep learning curve. Tonight he commanded his pitches in the strike zone very well, and unlike Jeremy Sowers, was able to go through the full batting order three times. He left after the eighth having thrown 112 pitches. Even as bad as the bullpen has been this season, there's no justification to risk an injury just to close out a single game. Especially now since this and all future games this season are in essence meaningless.

Grady Sizemore returned to the lineup, and showed no sign of rust, going two for five. He hit what was scored a triple in the third (the Pirates' right fielder took a horrendous route on a Sizemore liner, and the ball got past him), driving in the first two runs in the game. Later in the inning, Jhonny Peralta would drive in two more, chasing starter Ian Snell in the process. Jhonny homered in the sixth to plate the Indians' fifth run. With David Huff pitching through the eighth, the Indians' traditional pitfall inning, surely a five-run lead would be safe for one more inning, right?

Matt Herges and Kerry Wood pitched as bad as humanly possible in the ninth while only giving up four runs. Herges started the inning by giving up an Adam LaRoche bomb, then gave up hits to two of the next three hitters. That brought on Kerry Wood, who had blown two saves last weekend in Chicago. He looked just as bad in Pittsburgh, not being able to spot any of his pitches where he wanted them to go. Jack Wilson doubled, then he blew away Delwyn Young with fastballs. Andrew McCutchen then drove in the third run of the game with a single. Now the tying run came to the plate, and what was left of Wood's confidence seemed to evaporate. He walked the next two batters unintentionally to bring back to the plate Adam LaRoche. Everything seemed set up for another spectacular loss, especially after the count went full. But the unexpected happened: LaRoche flew out, the Indians won, and Wood notched a "save".The FanGraph had the Indians' win percentage in that last at-bat at 72.3%, but it didn't know that Kerry Wood was pitching. 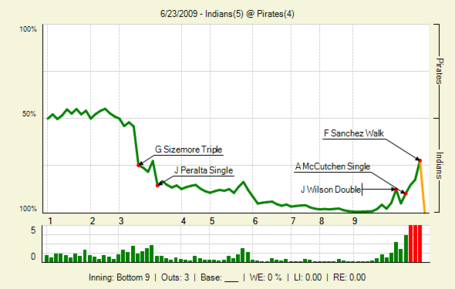