We've come to the end of the 2009 season, at least the competitive part of it. The Indians are now 10 games out of first place, and 13 games under .500. After the Cardinals series, the Indians were 6 games back and 7 games under .500. Last week, there was a slim chance to making up ground, since they'd be getting both offensive and pitching reinforcements. Now, it's time to take stock of who to keep and who to get rid of. Starting with coaching staff.

Today's game didn't involve late-inning dramatics, as there wasn't a chance for the bullpen to blow the game. Jeremy Sowers again ran out of steam as he approached the middle innings. He gave up four runs in the fifth inning, including a two-run double to Jake Fox. Jeremy's in the rotation only because three better starters are on the Disabled List, and one more talented starter is regrouping in Arizona. I can't see the Indians keeping him through the offseason as a starter.

Next Up: An Off-Day, which could be a very newsworthy day. 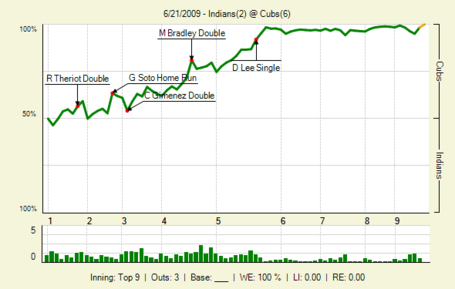