I was all set to concentrate some good things after today's game. Tomo Ohka did his job, going six innings, the bullpen was relatively decent, and Luis Valbuena has had a breakout series. And maybe there will be a time and place for that later on.

But for now, you can't talk about the good things on this team, for the endings are always the same nowadays: brutal, come-from-ahead losses. This team, to use a time-worn cliché, is finding ways to lose. Most of them having something to do with the bullpen. Today it wasn't the eighth inning crew, or any of the setup cronies for that matter. Setup pitched six innings of scoreless baseball, a good outing by any relief group. It was Kerry Wood, who blew a one-run save opportunity yesterday, who this time blew not only the save, but the game. Kerry couldn't spot his breaking pitches again, and became a one-pitch pitcher. Kelly Shoppach could have defused the inning just by making a decent throw to nab Kosuke Fukodome running to second, but his throw tailed into the runner, and instead of there being two outs and nobody on, there was one out and a runner on third. This brought the infield in, and turned an Andres Blanco game-ending grounder to short into a run-tying single. Aaron Miles hit a bloop single to move Blanco to third, and Wood finished things off in style by uncorking a wild pitch to end the game.

The frustrating thing about this loss is that the Indians had the tactical advantage. They still had relievers in their bullpen to use, and the Cubs were on their last one, and he had thrown two innings the day before. Now you may say that sending any Indians reliever to the mound in a tie game would be an advantage for the other team, but  still, the Cubs were probably going to have to go with one of the starters should the game go any longer.

Then there was the inexplicable pinch-hit appearance for Trevor Crowe in the ninth. No, he wasn't pinch-hitting for the pitcher, but for Ryan Garko, who had spent the previous inning in the outfield presumably so he could bat the next time up. Maybe Garko hurt himself running in from the outfield, but besides that, i got nothin'. 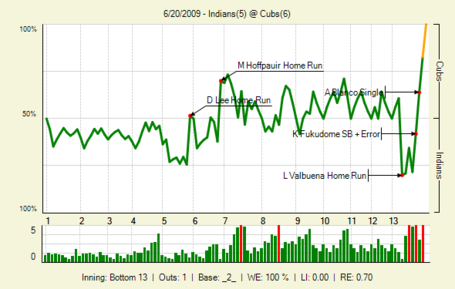