Take a very talented opposition lineup, add three five-inning starts, a pinch of wildness, and two heaping cups of bad relieving, and you have the trainwreck that was a Brewers three-game sweep of the Indians.Today it was David Huff who couldn't pitch past the fifth inning, though he didn't pitch badly. For a while this game seemed the spitting image of yesterdays' loss. The Brewers and Indians were tied in the middle innings, but as the end of the game approached, Milwaukee added runs late in the game. But today's contest was different, for the Indians scored four runs in the ninth (two off of previously perfect Trevor Hoffman) to tie the game and send it into extra innings.

But still that minor detail remained: how to get outs using the bullpen. Kerry Wood did his job in the tenth, but he was only usable for an inning. After that it was Greg Aquino, and true to form, he walked some batters, and one of those walks came around to score. Whatever magical spell it was that turned Aquino, Vizcaino, and Herges into decent major-league relievers has worn off. 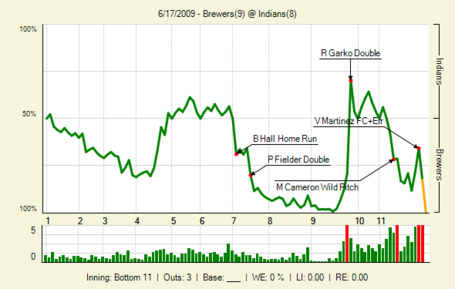