After a brief sojourn in normalcy, the Cleveland Indians have returned to bullpen hell. For the second night in a row, the Indians offense probably did enough to win yet the team lost. Tonight, Jensen Lewis was the culprit, surrendering 4 ERs in 2.2 IP. There were significant offensive bright spots, with Luis Valbuena hitting two doubles, Shin-Soo Choo going 3-4 and Travis Hafner smacking a two run homerun. The bullpen can't be totally blamed, as Sowers only mustered a mediocre performance in five innings and with the bullpen already taxed last night, that's not a good situation.

It's becoming increasingly clear that the Indians are a very good offensive team, as they are now fourth in the league in runs scored and have a number of truly outstanding offensive performers. The problem is that the Indians bullpen appears to be regressing to it's early season form and, frankly, it can't be called unexpected. Journeymen relievers managed to put together a number of good weeks in a row; that was nice but obviously couldn't be expected to continue. However, it could be expected that the Indians supposedly "good" relievers would right themselves and be able to stabilize the bullpen when these journeymen relievers faltered. This has not happened, at all, as Lewis, Perez and Betancourt are all mired in various forms of not performing. Only Wood has bailed the water out of his ship and he's not ever going to be used at this rate. 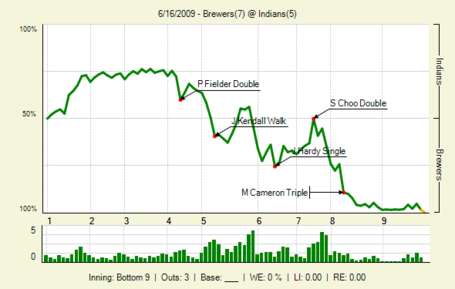