Tonight's matchup was twice the game last night's contest was, in that it took twice as long to play. It was more than  twice as ugly as last night's pitcher's duel. Sunday's game had quick innings and outstanding pitching. Tonight's slugfest had poor pitching, wild pitches, walks, and a lot of home runs. Yesterday Cliff Lee went the distance, giving up no runs on three hits. Tonight's starter, Carl Pavano, gave up three hits and two runs...in the first inning. Pavano, who had been on a nice stretch of good starts, fell apart for the second consecutive start, barely getting through five innings. But by this time the Indians still had the lead, and they'd add more runs in their half of the sixth.

But the trio of Greg Aquino, Luis Vizcaino, and Matt Herges, all "free" talent that had done much to stabilize the bullpen in the last month, couldn't stay in the strike zone despite a significant lead. Aquino bumbled his way through the sixth and into the seventh, but he had to be relieved by Vizcaino, who got out of that inning but couldn't throw strikes in the eighth. And Matt Herges couldn't even get out of the eighth. He gave up a bases-loaded infield single to Ryan Braun and was pulled in favor of Rafael Perez. When Perez came into the game, the Indians were still leading by three. Even if he allowed a run or two, the Indians had Kerry Wood for the ninth. But he threw a high pitch to Prince Fielder, and the Brewers first baseman absolutely crushed it for a grand slam. The Brewers now led 13-12, and although Perez was visibly shaken, he was allowed to pitch to two more hitters before being pulled. All told, Cleveland relievers allowed eight runs, all of them earned, on six hits and six walks. It was the walks that brought the Brewers back into the game, and given the score, there was no excuse for them.

Remember that game the Indians stole against Zach Greinke? That win just got cancelled out by this loss, a game in which they had two significant leads, including a four-run lead going into the eighth. The long-term prospects also took a hit. What if Carl Pavano is running out of gas? He's long since passed his major-league innings total of the last four seasons combined. And what exactly is wrong with Rafael Perez?

Next Up: Gallardo vs. Sowers, 7:05 PM. Looking at this matchup, tonight's loss hurts even more. 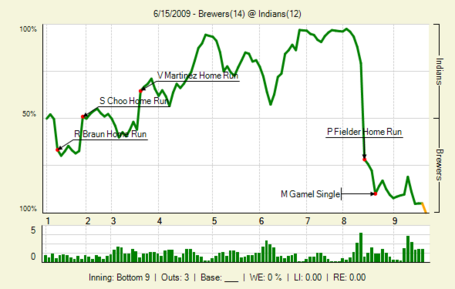