Before the game, on ESPN's Baseball Tonight, Cliff Lee's 3-6 record was brought up as evidence that his 2009 had been sub-par. Steve Phillips, to his credit, quickly shot that down by noting that the Indians just weren't scoring runs during his starts. Lee then went on to show during the Sunday Night broadcast that he's pitching almost as well as his 2008 Cy Young season. After tonight, his ERA should be south of 3.00; last year at this time, his ERA was 2.55. He'll probably rank fourth in the AL in PRC, though well behind both Roy Halladay and Zach Greinke. Please, please, pay no attention to the record. It didn't matter last season, and it shouldn't this year.

Lee started tonight's game against the Cardinals with two walks in the first inning. Against Brendan Ryan, St. Louis's leadoff hitter, he just couldn't find the plate, but his free pass to Albert Pujols was more defensive pitching than wildness. He retired Ryan Ludwick and Nick Stavinoha to get out of the jam, and then went into a pitching zone. Cardinals hitters swung early in the count, probably because an aggressive approach was tonight's strategy against Lee, but Cliff was spotting his pitches so well that many of those early swings turned into weak-hit outs.

At the same time, Chris Carpenter was likewise zooming through innings, though the Indians were able to take advantage of their first inning opportunity. Mark DeRosa cranked a two-run homer in the first and Kelly Shoppach hit one out in the fifth, but beyond that, Carpenter was just as in control as Lee was. He gave up 6 baserunners in his eight innings of work, just one more than Lee did.

But back to Lee. After the first inning, the game seemed to go on fast-forward, so that his no-hitter bid seemed to jump up on you. There didn't seem enough time for the anticipation to build, so quickly was the game progressing. Albert Pujols lead off the inning, and after he got him to fly out to right field, Lee wouldn't have to face him again if he retired the next six hitters. In other words, his biggest obstacle in no-hitting the Cardinals was removed. He retired the next two batters in quick order, leaving just six outs remaining.

Yadier Molina lead off the eighth swinging at Lee's first pitch, a changeup on the outside corner. It was probably a bit higher than Lee wanted it to be, but still an excellent pitch. Unfortunately, the ball was hit straight down the line, and Shin-Soo Choo couldn't get to it before it hit at the base of the wall for an easy double. The no-hitter was no more. Choo could have caught the ball, but it would have taken a great defensive play to do so, for he would have had to overcome the wall, his glove hand being away from the path of the ball, and having to make the catch, despite these obstacles, on the dead run.

After that first hit, Cliff Lee took some time to regroup, for the game was still in doubt. The lead was three, and Cardinals were one baserunner from bringing the tying run to the plate. And Albert Pujols was now all but guarenteed another at-bat. If he allowed the runner on second to score, just one baserunner in the ninth would allow Pujols to tie the game with one swing of the bat. Colby Rasmus moved Molina to third with a weak grounder to second. Lee then recorded a big out in striking out Tyler Greene, and preserved the shutout by inducing another groundout.

The Cardinals did bring the tying run to the plate in the ninth, but it wasn't until after Pujols stepped to the plate. Brendan Ryan singled to open the inning, but Lee got Rick Ankiel to fly out. So the game's best player couldn't tie the game, and Lee got him to pop up after a masterful pitch sequence. Ryan Ludwick singled to put the game in the balance, but Stavinoha flied out to right to end the game. Lee finished his three-hit masterpiece having thrown just 93 pitches, most of which were just fastballs and changeups. He accomplished this by moving his fastballs in and out, or up and down, depending on the hitter. He used his changeups in place of his customary first-pitch fastball to get weak grounders. Tonight was the perfect embodiment of his 2008 transition from thrower to pitcher.

The Indians have won three straight series, are seven games under .500, and more importantly, six games out of first place. It's still a long shot for this team to climb back into contention, but a couple more series wins will make that long shot a lot shorter as players start to come off the Disabled List. 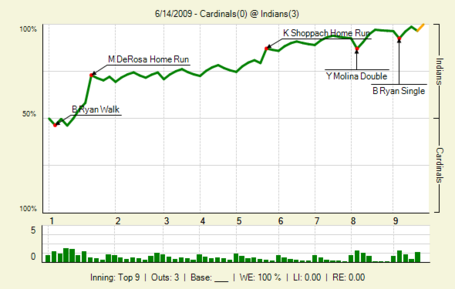