That the Indians lost a game that Tomo Ohka started isn't exactly startling, however, it is startling that it wasn't Ohka's fault. Tomo (if I may be so bold) was brilliant today, turning in a 7 IP, 2 ER performance and never having to pitch out of too much trouble. This was Ohka's best start since April of 2007, which is only impressive until you realize he didn't pitch in the majors in 2008. Still, those 2 runs proved to be too much for the Indians' offense which was in one of it's more anemic forms today, sporting two sub .200 batting averages in Valbuena and Crowe. The game got further away from the Indians in the 8th inning when Rafael Perez looked alternately brilliant (2 K's) and shaky (1 BB, 1 WP). I don't want to frighten anyone but is anyone else starting to see Ferd when they look at Perez?

Today's loss was an average one, simply a matter of the hits not coming when they needed to; the Indians had opportunities late in the game in the forms of a Peralta lead off double in the 7th, a two on, one out situation for the heart of the lineup for the 8th, and two hits to lead off the 9th. Of course, the first hit in the 9th was Josh Barfield trying to turn a pop-up into a double and getting caught in a run-down (at least that's what I'm surmising from Gameday) which, well, what can you say except for whatever, Barfield.

The most notable element of this game was Albert Pujols' continued assertion that he is the best player in all of baseball, belting two homeruns and a double. To say that Albert is good is to vastly understate the situation.

The Indians continue to soldier through interleague play with one more game against the Cardinals and then a series against Milwaukee. 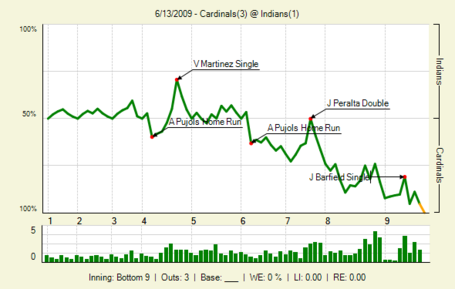 Tomorrow's the matchup to watch with Cliff Lee facing Chris Carpenter at 8:05. See you at the Prog for all the marbles.