For the first time all season, the indians are on a hot streak, and it's come when absolutely needed.

David Huff, instead of melting after being thrown into the fire, has come out a tempered major-league starter. The Cardinals are a good offensive club, and David pitched a polished game, mixing his pitches, hitting the strike zone to get ahead, nicking the corners when he got behind, and not panicking when the Cardinals got on base. He allowed six hits and two walks in 7.1 innings, and his pitching line would have looked much better had Eric Wedge taken him out after seven. I mentioned previously that the Indians needed either Jeremy Sowers or David Huff to step up this month if they had any chance of getting back into the race, and so far, both have given the Indians decent or better starts.

The Indians lineup has continued to produce despite the injuries. Wedge decided to go with an offense-first lineup today, with Ryan Garko in left, Ben Francisco in center, and Jhonny Peralta at shortstop. He also shifted Francisco from the leadoff spot down in the order. I'm not much a quibbler about battings orders, but Francisco doesn't have the skill set that translates well to traditional leadoff hitter expectations. Ben will hit for power and can steal a base, but doesn't walk if he can help it. So Wedge decided to go with Jamey Carroll at the top of the order for now, which makes the bottom of the order a bit better.

Tonight's opposing starter, Joel Piñeiro, has transitioned from a power pitcher to one who pitches to contact, and has been remarkably good at avoiding walks; coming into tonight's game, he had walked just 9 batters in 71.0 innings. But the Indians are good at drawing walks, and tonight their ability of drawing the free pass overcame Piñeiro's stinginess in allowing them. In the second inning, after two were out, Victor Martinez drew a walk, went to second on a wild pitch, and came home on a Shin-Soo Choo single. Piñeiro's second walk, also with two outs, came around to score as well in the fourth.

Joel was forced out with one out in the seventh, and Tony LaRussa started his patented matchup game, trotting out three relievers in order to finish the inning. And not all of his best-laid tactical strikes worked, for Denys Reyes, who had owned Victor Martinez during his Twins career, walked Victor to load the bases. Reyes stayed in to face Choo, and though the matchup was left-on-left, Choo ripped a single to center to push the lead out to 4-1.

The Indians had their own reliever troubles in the eighth after Huff left with one out and two on. Joe Smith gave up two straight singles, and the lead was back to one run. Rafael Perez was brought on with two outs to get Chris Duncan, but he walked him and only escaped after Yadier Molina hit a liner right at Jhonny Peralta. That was the closest the Cardinals would get, for the Indians would add two more runs in their half of the inning, and brought in Kerry Wood in the ninth just to make sure. 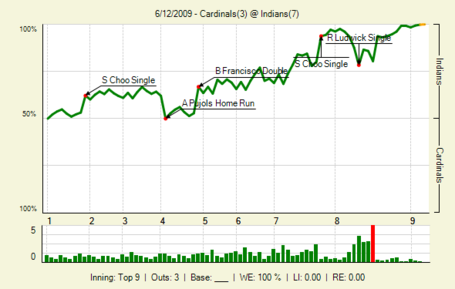