The Indians aren't a good team right now, but when Cliff Lee's on the mound, they're an excellent club. Likewise with the Royals and Zack Greinke; beating Kansas City with him on the mound is as difficult as defeating one of the best teams in baseball. And with the Indians sending Jeremy Sowers to the mound, the matchup seemed more like the Dodgers versus the Nationals than the two teams listed on the schedule.

Sowers in the first few innings was at the top of his game, spotting his fastball early in the count to get ahead, and even getting some swings and misses. But while Greinke seemed to be getting better as the game went on, Sowers seemed to be struggling forward just on his initial momentum. His last two innings were mortal struggles; he threw 36 pitches in the fifth inning alone. But to his credit, he left the game having only given up two runs. The Indians were still in the game, a minor victory by itself.

Greg Aquino relieved Sowers in the sixth, having little room for error given the score and opposition. He pitched scoreless innings in the sixth and seventh, and almost pitched a third scoreless frame, but he grooved a high fastball to Miguel Olivo, and the Kansas City catcher homered to give the Royals a 3-1 lead. But compared to what the Indians were getting in these situations early in the season, Aquino's outing was fantastic. Although coming back from a two-run deficit seemed a tall order, at least it seemed possible.

Greinke tired as he approached 100 pitches. The Indians hit several balls on the screws in the seventh, and Ben Francisco lined out to begin the eighth. Then Mark DeRosa singled, and Victor Martinez worked a walk; Greinke was done, if not due to pitch count, then due to ineffectiveness. The Royals then gave the Indians an opening after John Bale came on; Shin-Soo Choo hit a grounder to first, and rather than being content to get a force at second, shortstop Tony Peña tried to turn a double play. The pitcher was covering at first, and he couldn't get to the relay. The ball bounded away, and not only did DeRosa score, but Choo went to second on the throw home.

Joakim Soria was then brought on for a four-out save. The Royals closer didn't have command of his curve, and hung one to Jhonny Peralta. If not for the wind blowing in, Peralta would have hit the hanger over the fence to give the Indians the lead, but on this night there was a good breeze blowing straight in, so the ball hit a foot or so below the top of the left field fence for a game-tying double. And now, with the game tied, the contest was no longer Greinke versus Sowers, but Soria versus Wood, a much more competitive matchup. Wood pitched a 1-2-3 ninth, and Matt Herges pitched a scoreless tenth. Trey Hillman elected to go with Kyle Farnsworth for the tenth, and the Indians, for the first time all game, had the advantage in a pitching matchup. DeRosa singled, Victor Martinez walked, and Shin-Soo Choo singled through a screech of gulls, clipping the wing of one unfortunate bird in the process. The ball was deflected just enough for Coco Crisp to miss the ball entirely, though I don't think the play at the plate was going to be close anyway. And so, with some good relief pitching and a couple of excellent late-inning at-bats, the Indians stole one at home. 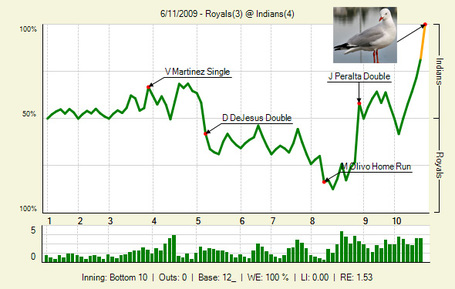