The final deficit could have easily been worse, for Indians pitchers walked eleven tonight. Jeremy Sowers against the Yankee lineup is about as good a combination for success as a match and a room-full of gunpowder. The flame stayed lit for five innings, as Sowers got into and out of jams in the first and third innings, and somehow, when the smoke cleared, he had only given up a run through five innings. Sowers started the sixth by walking the bases loaded, and Eric Wedge, remembering Jeremy's start in Boston, pulled him in favor of Greg Aquino. Sowers had pitched fairly well, largely staying out of the strike zone, which meant lots of walks, but also no big hits. He also managed to strike out three batters. Because the Indians don't really have any other options, he's going to stay in the rotation, but this was probably Jeremy at his best.

Aquino squirmed his way out of the inherited jam, and kept the game surprisingly tied at one. The problem was that Joba Chamberlain (born Justin Louis Heath, per the always accurate wikipedia) was having the best start of his career. As scores of gulls frolicked in the outfield and thousands of insects descended on the stadium, the right-hander scoured through the short-handed Cleveland lineup. Victor Martinez, who had returned quickly from a painful-looking knee contusion, took the pitcher deep to right in the fourth inning. Victor was batting left-handed, so his bruised left knee provided the power that propelled the pitch. In the fifth, the Indians had their best chance against the New York starter, with Ryan Garko and Jamie Carroll reaching with nobody out. Even with it being just the fifth inning, Eric Wedge had Kelly Shoppach bunt, but he popped the pitch into the air, high enough for the Yankee pitcher to bound off the mound and catch the ball as he plunged to earth. Garko was doubled up at second, and the rally disintegrated.

The Yankees finally took command in Greg Aquino's second inning of work. The inning after he diffused a bases-loaded jam, he created one himself by walking the sacks full with one out. Nobody was warming at the start of the inning, otherwise he wouldn't have had to pitch to Nick Swisher. But he did, and Swisher doubled half-way up the left field wall, plating two Yankees and setting the stage for two more runs in the inning. 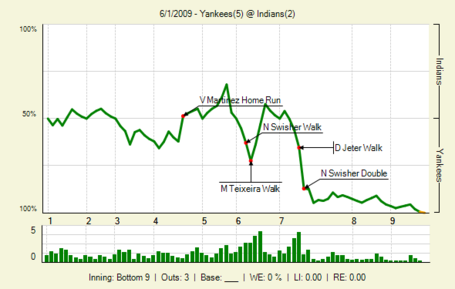