Share All sharing options for: Who Killed the Cleveland Indians? - part 2: Slider 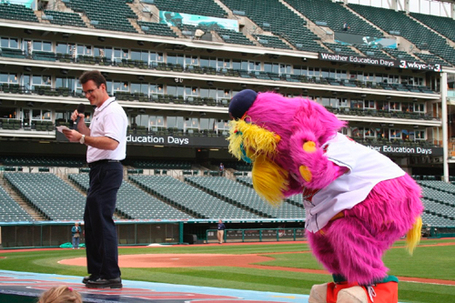 Nothing has been confirmed, no bodies found, but two more missing persons - Anthony Reyes and Aaron Laffey.  No one's laughing now.  In part 2 of my ongoing investigation (part 1 - John Adams) I look at the Indians seemingly fun-loving mascot, Slider.

Suspect: Slider (above, right - is that a dance, or a sneak attack?)

Weapon of Choice: The "Slider hug"

Potential Alibi: Slider doesn't exactly blend into a crowd and countless eyewitnesses suggest he spends most of each game not even watching the action on the field.

Motive: If it was Slider, it appears to be a case of "Sideshow Bob Syndrome" - jealousy.  Who were the Indians coming into this season with the best sliders?  Rafael Perez - gone.  Aaron Laffey - gone.  Tony Sipp - gone.  Fausto Carmona is still around, but since 2007 he's been clearly looking over his shoulder and using less and less of his once effective slider.  Is this just a coincidence - or has the real Slider decided to take out his competition one at a time.  Further evidence, when was the last time you saw Grady Sizemore hit a slider?...